Owners of the luxury cruise ship that ran aground off the coast of Italy, killing at least six people over the weekend, blamed the ship’s captain Monday for a disaster that has rattled an industry already struggling to rebound.

Rescue workers continued to search for survivors, three days after the Costa Concordia struck a piece of rocky shoreline late Friday and fell on its starboard side with more than 4,200 passengers and crew aboard the 105,000-ton vessel. 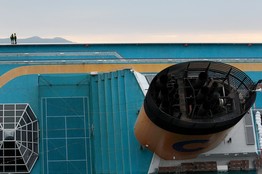 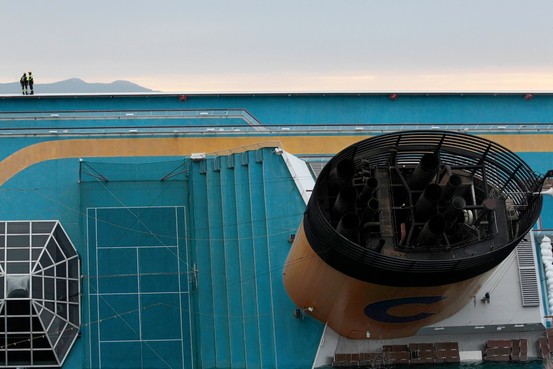 Associated PressItalian rescue personnel atop the Costa Concordia cruise liner, which ran aground off the Tuscan island of Giglio, Italy. Workers searched for people still missing.

The crash set off a chaotic exodus as people escaped through the tilted corridors of the listing ship, then leapt into the sea, swimming 400 feet to shore, a distance a bit longer than a football field. Italian coast guard authorities said 29 people remained missing.

The vessel’s owner—Costa Crociere, a unit of Carnival Corp.—said the 52-year-old skipper, Francesco Schettino, had taken an unauthorized detour from the route that had been programmed into the computer’s navigation system. Mr. Schettino, who denied wrongdoing before being taken into custody, was detained on preliminary charges of manslaughter, shipwreck and abandoning ship while passengers remained aboard, according to his lawyer.

Pier Luigi Foschi, chief executive of Costa Crociere, said Monday the accident came after Mr. Schettino steered the ship too close to the island of Giglio, where it struck a rock formation that capsized the vessel.

“I can’t deny there was human error,” Mr. Foschi said. “We’re talking about an initiative that commander Schettino took, according to his own will and contrary to our rules of conduct.” 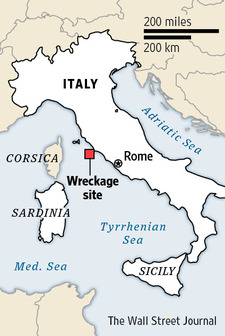 Passengers described a confused response from the crew. At first loudspeakers reported a power outage and instructed passengers simply to stay calm. About 20 minutes later, passengers said, an evacuation alarm sounded, sparking a stampede for the lifeboats.

“People were literally running so fast that they didn’t even realize they were walking on top of the bodies of others who had fallen,” said Elena Perilli, a 47-year-old Italian journalist aboard.

Elena Miccoli, a 41-year-old hairdresser, was at dinner when the ship’s collision with the rock formation jolted her table. In the confusion that followed, she said, “There were some really ugly scenes.”

Costa Crociere spent about €450 million ($570 million) on the ship, which entered service in July 2006. It is insured for €405 million by companies including XL Group PLC, RSA Insurance Group PLC and Assicurazioni Generali SpA.

Liability is covered through a separate arrangement with the Standard Club, a mutual insurance association owned by its shipowner members. The Costa Concordia is insured for a maximum of $3.06 billion, Mark Baylis, a spokesman for the club, said Monday.

More than a dozen such clubs cover a wide range of liabilities, including injuries to passengers and crew, damage to cargo or docks, oil pollution and the removal of wreckage. Such coverage isn’t voided by criminal wrongdoing of a crew member or captain, Mr. Baylis said.

Mr. Schettino faces questioning Tuesday by an Italian judge on his handling of the ship, said his lawyer Bruno Leporatti in a statement Monday.

The statement didn’t respond to prosecutors’ allegations or Mr. Foschi’s accusation. Mr. Schettino is “comforted by the knowledge that he maintained, at the time, the necessary clarity to carry out a difficult emergency maneuver—bringing the boat to shallow waters—that saved the lives of many people, passengers and crew,” the statement said. 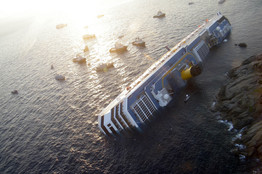 Before he was detained by police on Saturday, Mr. Schettino told Italian media that the ship was traveling at a safe distance from the Giglio’s shore and it struck a rock that was unmarked on nautical maps. He also told reporters that he and his crew were “the last to abandon ship.”

Italian prosecutors allege the boat hit a well-known rock formation, adjacent to the island’s coastline, cutting a gash in the ship’s hull. They are investigating a report by local officials that Mr. Schettino steered close to the island to give those ashore a good view of the ship as it sounded its horn. Prosecutors also allege the captain left the ship before it had been fully evacuated by the coast guard.

Italian officials told The Wall Street Journal that the coast guard learned of the ship’s troubles when passengers phoned police. The coast guard contacted the ship’s command at about 10:15 p.m.—more than a half-hour after the boat hit the rock formation—to press the commander to evacuate the ship.

The cruise industry has been trying to regain its footing after setbacks last year, including unrest in the Middle East, higher fuel costs and troubles in the euro zone.

Dramatic images of the ship were broadcast world-wide at the height of the cruise-booking season. Roughly one quarter of all cruises each year are reserved in January and February, analysts estimate.

Karen Kucharski, a 47-year-old consultant from Lake in the Hills, Ill., said she and her family had been planning to take a Caribbean cruise in March. “We will definitely not be going now,” she said.

Carnival estimated its profit for the year ending Nov. 30 would fall by as much as $95 million from the loss of the use of the ship. The company said most of the costs of the accident would fall on insurers.

Costa Crociere and Carnival Corp. have come under intense scrutiny. Carnival’s share price fell 16% on the London Stock Exchange. Mr. Foschi said he wasn’t sure whether the ship was a total loss.

“Any tragedy has a negative impact, and this is clearly a tragedy,” said Brad Tolkin, co-chairman of World Travel Holdings, a leisure travel company. “The pictures are bad, and that’s what’s resonating in front of the consumer mind right now.”

Listen On Your Phone

Help-us with a small donation